On Performance of the New Collections

In a previous blog post, I explained how Scala 2.13’s new collections have been designed so that the default implementations of transformation operations work with both strict and non-strict types of collections. In essence, we abstract over the evaluation mode (strict or non strict) of concrete collection types.

After we published that blog post, the community raised concerns about possible performance implications of having more levels of abstraction than before.

For reference, the source code of the new collections is available in this GitHub repository.

Overhead Of View Based Implementations

Let’s be clear, the view based implementations are in general slower than their builder based versions. How much slower exactly varies with the type of collection (e.g. List, Vector, Set), the operation (e.g. map, flatMap, filter) and the number of elements in the collection. In my benchmark on Vector, on the map, filter and flatMap operations, with 1 to 7 million of elements, I measured an average slowdown of 25%.

How To Fix That Performance Regression?

In practice these implementations are factored out in traits that can be mixed into concrete collection types. Such trait names are always prefixed with StrictOptimized. For instance, here is an excerpt of the StrictOptimizedIterableOps trait:

Then, to implement the Vector collection, we just mix such a “strict optimized” trait:

Is The View Based Design Worth It?

In my previous article, I explained a drawback of the old builder based design. On non strict collections (e.g. Stream or View), we had to carefully override all the default implementations of transformation operations to make them non strict.

So, is the new design worth it? To answer this question I will quote a comment posted by Stefan Zeiger here:

The lazy-by-default approach is mostly beneficial when you’re implementing lazy collections because you don’t have to override pretty much everything or get incorrect semantics. The reverse risk is smaller: If you don’t override a lazy implementation for a strict collection type you only suffer a small performance impact but it’s still correct.

In short, implementations are correct first in the new design but you might want to override them for performance reasons on strict collections.

Talking about performance, how performant are the new collections compared to the old ones?

Again, the answer depends on the type of collection, the operations and the number of elements. My Vector benchmarks show a 35% speedup on average: 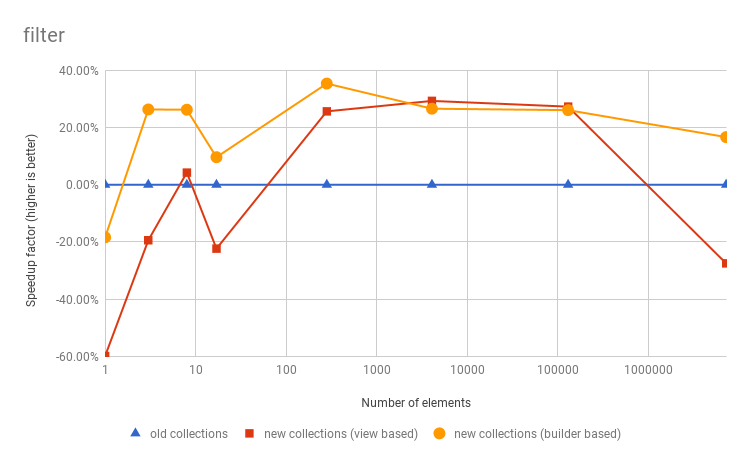 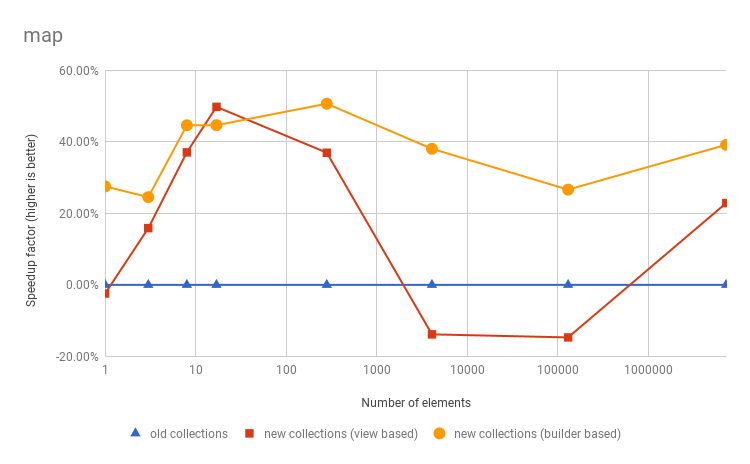 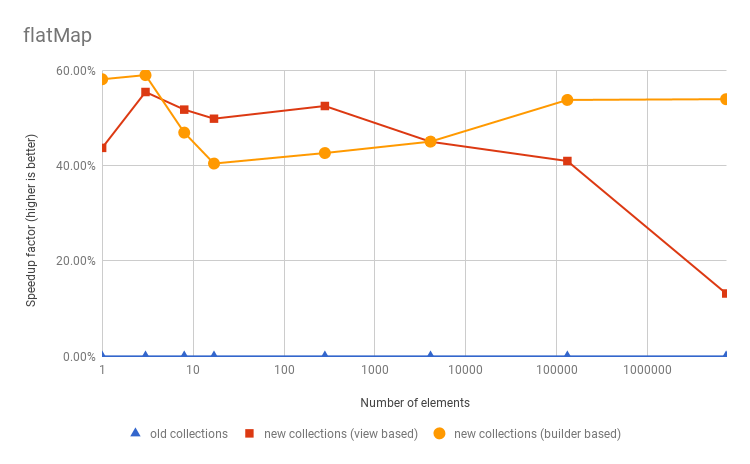 Since operation implementations end up being the same, why do we get better performance at all? Well, these numbers are specific to Vector and the tested operations, they are due to the fact that we more aggressively inlined a few critical methods. I don’t expect the new collections to be always faster than the old collections. However, there is no reason for them to be slower since the execution path, when calling an operation, can be made exactly the same as in the old collections.

I expect the new collections to be equally fast or slightly faster than the previous collections. Indeed, we took advantage of the rewrite to apply some more optimizations here and again.

More significant performance improvements can be achieved by using different data structures. For instance, we recently merged a completely new implementation of immutable Set and Map based on compressed hash-array mapped prefix-trees. This data structure has a smaller memory footprint than the old HashSet and HashMap, and some operations can be an order of magnitude faster (e.g. == is up to 7x faster).