This guide is intended to help you get from an idea of fixing a bug or implementing a new feature into a nightly Scala build, and, ultimately, to a production release of Scala incorporating your idea.

This guide covers the entire process, from the conception of your idea or bugfix to the point where it is merged into Scala. Throughout, we will use a running example of an idea or bugfix one might wish to contribute.

Other good starting points for first-time contributors include the Scala README and contributor’s guidelines.

Let’s say that you particularly enjoy the new string interpolation language feature introduced in Scala 2.10.0, and you use it quite heavily.

Though, there’s an annoying issue which you occasionally stumble upon: the formatting string interpolator f does not support new line tokens %n.

One approach would be to go the mailing list, request that the bug be fixed, and then to wait indefinitely for the fix arrive. Another approach would be to instead patch Scala oneself, and to submit the fix to the Scala repository in hopes that it might make it into a subsequent release.

Of note: There are several types of releases/builds. Nightly builds are produced every night at a fixed time. Minor releases happen once every few months. Major releases typically happen once per year.

Sometimes it’s appealing to hack alone and not to have to interact with others out of fear, or out of comfort. However, in the context a big project such as Scala, this might not be the very best idea. There are people in the Scala community who have spent years accumulating knowledge about Scala libraries and internals. They might provide unique insights and, what’s even better, direct assistance in their areas, so it is not only advantageous, but recommended to communicate with the community about your new patch.

Typically bug fixes and new features start out as an idea or an experiment posted on one of our mailing lists to find out how people feel about things you want to implement. People proficient in certain areas of Scala usually monitor mailing lists, so you’ll often get some help by simply posting a message. But the most efficient way to connect is to cc your message to one of the people responsible for maintaining the aspect of Scala which you wish to contribute to.

A list of language features/libraries along with their maintainer’s full names and GitHub usernames is in the Scala repo README.

In our running example, since Martin is the person who submitted the string interpolation Scala Improvement Proposal and implemented this language feature for Scala 2.10.0, he might be interested in learning of new bugfixes to that feature. 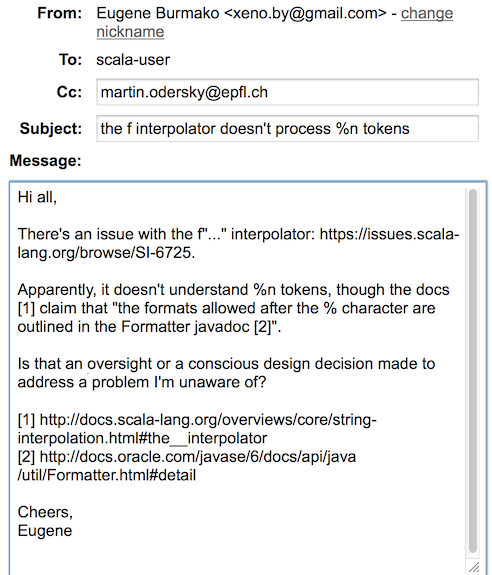 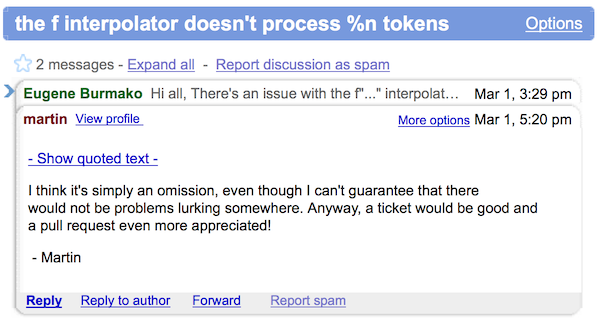 Now that we have the approval of the feature’s author, we can get to work!

Hacking Scala begins with creating a branch for your work item. To develop Scala we use Git and GitHub. This section of the guide provides a short walkthrough, but if you are new to Git, it probably makes sense to familiarize yourself with Git first. We recommend

Log into GitHub, go to https://github.com/scala/scala and click the Fork button in the top right corner of the page. This will create your own copy of our repository that will serve as a scratchpad for your work.

If you’re new to Git, don’t be afraid of messing up– there is no way you can corrupt our repository.

If everything went okay, you will be redirected to your own fork at https://github.com/user-name/scala, where username is your github user name. You might find it helpful to read http://help.github.com/fork-a-repo/, which covers some of the things that will follow below. Then, clone your repository (i.e. pull a copy from GitHub to your local machine) by running the following on the command line:

This will create a local directory called scala, which contains a clone of your own copy of our repository. The changes that you make in this directory can be propagated back to your copy hosted on GitHub and, ultimately, pushed into Scala when your patch is ready.

Before you start making changes, always create your own branch. Never work on the master branch. Think of a name that describes the changes you plan on making. Use a prefix that describes the nature of your change. There are essentially two kinds of changes: bug fixes and new features.

If you are new to Git and branching, read the Branching Chapter in the Git Pro book.

The next step after cloning your fork is setting up your machine to build Scala.

You need the following tools:

OS X and Linux builds should work. Windows is supported, but it might have issues. Please report to the Scala bug tracker if you encounter any.

Building Scala is as easy as running sbt dist/mkPack in the root of your cloned repository. In general, it’s much more efficient to enter the sbt shell once and run the various tasks from there, instead of running each task by launching sbt some-task on your command prompt.

Be prepared to wait for a while – a full “clean” build takes 5+ minutes depending on your machine (longer on older machines with less memory). On a recent laptop, incremental builds usually complete within 10-30 seconds.

There’s no single editor of choice for working with Scala sources, as there are trade-offs associated with each available tool.

There also exist lighter-weight editors such as Emacs, Sublime or jEdit which are faster and much less memory/compute-intensive to run, while lacking semantic services and debugging. To address this shortcoming, they can integrate with ENSIME, a helper program, which hosts a resident Scala compiler providing some of the features implemented in traditional IDEs. However despite having significantly matured over the last year, support for our particular code base is still being improved, and is not as mature as for Eclipse and IntelliJ.

When hacking on your topic of choice, you’ll be modifying Scala, compiling it and testing it on relevant input files. Typically you would want to first make sure that your changes work on a small example and afterwards verify that nothing break by running a comprehensive test suite.

We’ll start by creating a sandbox directory (./sandbox is listed in the .gitignore of the Scala repository), which will hold a single test file and its compilation results. First, let’s make sure that the bug is indeed reproducible by putting together a simple test and compiling and running it with the Scala compiler that we built using sbt. The Scala compiler that we just built is located in build/pack/bin.

Here are also some tips & tricks that have proven useful in Scala development:

There are several areas that one could contribute to – there is the Scala library, the Scala compiler, and other tools such as Scaladoc. Each area has varying amounts of documentation.

Contributing to the Scala standard library is about the same as working on one of your own libraries. Beyond the Scala collections hierarchy, there are no complex internals or architectures to have to worry about. Just make sure that you code in a “don’t-repeat-yourself” (DRY) style, obeying the “boy scout principle” (i.e. make sure you’ve left the code cleaner than you found it).

If documentation is necessary for some trait/class/object/method/etc in the Scala standard library, typically maintainers will include inline comments describing their design decisions or rationale for implementing things the way they have, if it is not straightforward.

Documentation about the internal workings of the Scala compiler is scarce, and most of the knowledge is passed around by email (Scala Contributors mailing list), ticket, or word of mouth. However the situation is steadily improving. Here are the resources that might help:

Tools like Scaladoc also welcome contributions. Unfortunately these smaller projects have less developer documentation. In these cases, the best thing to do is to directly explore the code base (which often contains documentation as inline comments) or to write to the appropriate maintainers for pointers.

To fix the bug we’re interested in we’ve tracked the StringContext.f interpolator down to a macro implemented in MacroImplementations.scala There we notice that the interpolator only processes conversions, but not tokens like %n. Looks like an easy fix.

After applying the fix and running sbt compile, our simple test case in sandbox/Test.scala started working!

To guard your change against accidental breakage in the future, it is important to add tests. I have already written one test earlier, so that’s a good start but not enough! Apart from obvious usages of our new functionality, we need to cover corner-cases as well.

Adding tests to the test suite is as easy as moving them to the appropriate directory:

Here are some more testing tips:

This means your change is backward or forward binary incompatible with the specified version (the check is performed by the migration manager). The error message is actually saying what you need to add to bincompat-backward.whitelist.conf or bincompat-forward.whitelist.conf to make the error go away. If you are getting this on an internal/experimental api, it should be safe to add suggested sections to the config. Otherwise, you might want to target a newer version of scala for this change.

Now to make sure that my fix doesn’t break anything I need to run the test suite. The Scala test suite uses JUnit and partest, a tool we wrote for testing Scala. Run sbt test and sbt partest to run all of the JUnit and partest tests, respectively. partest (not sbt partest) also allows you to run a subset of the tests using wildcards:

After development is finished, it’s time to publish the code and submit your patch for discussion and potential inclusion into Scala. In a nutshell, this involves:

Let’s go into each of these points in more detail.

The Git Basics chapter in the Git online book covers most of the basic workflow during this stage. There are two things you should know here:

Once you are satisfied with your work, synced with master and cleaned up your commits you are ready to submit a patch to the central Scala repository. Before proceeding make sure you have pushed all of your local changes to your fork on GitHub.

Now, we must simply submit our proposed patch. Navigate to your branch in GitHub (for me it was https://github.com/xeno-by/scala/tree/ticket/6725) and click the pull request button to submit your patch as a pull request to Scala. If you’ve never submitted patches to Scala, you will need to sign the contributor license agreement, which can be done online within a few minutes. 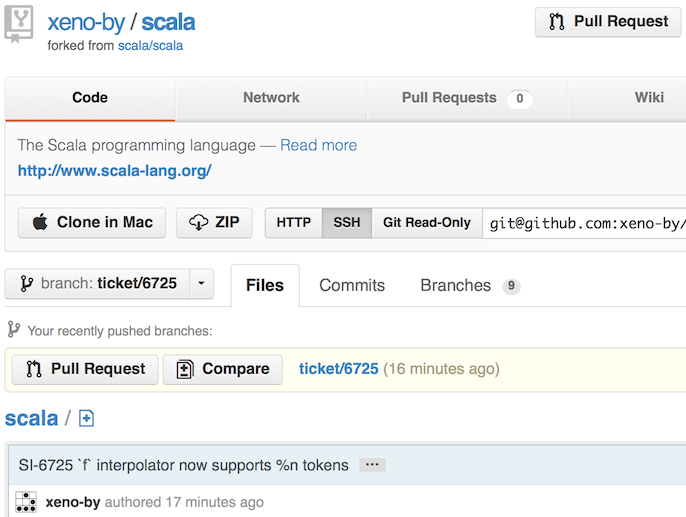 After the pull request has been submitted, you need to pick a reviewer (usually the person you’ve contacted in the beginning of your workflow) and be ready to elaborate and adjust your patch if necessary. In this example, we picked Martin, because we had such a nice chat on the mailing list:

After your reviewer is happy with your code (usually signaled by a LGTM — “Looks good to me”), your job is done. Note that there can be a gap between a successful review and the merge, because not every reviewer has merge rights. In that case, someone else from the team will pick up your pull request and merge it. So don’t be confused if your reviewer says “LGTM”, but your code doesn’t get merged immediately.